This is the Cardigan That Almost Wasn’t.

It’s the Capsule Cardigan from Greenstyle Creations. It came out a helluva mess, but I’ve been enjoying wearing it anyway. You can see from the pics that the front band is a bit too short, so the fronts of the cardigan don’t quite hang properly. I blame it all on the fabric I chose. You know, it’s NOT like it could have been the lack of skill on the part of the seamstress! 😉 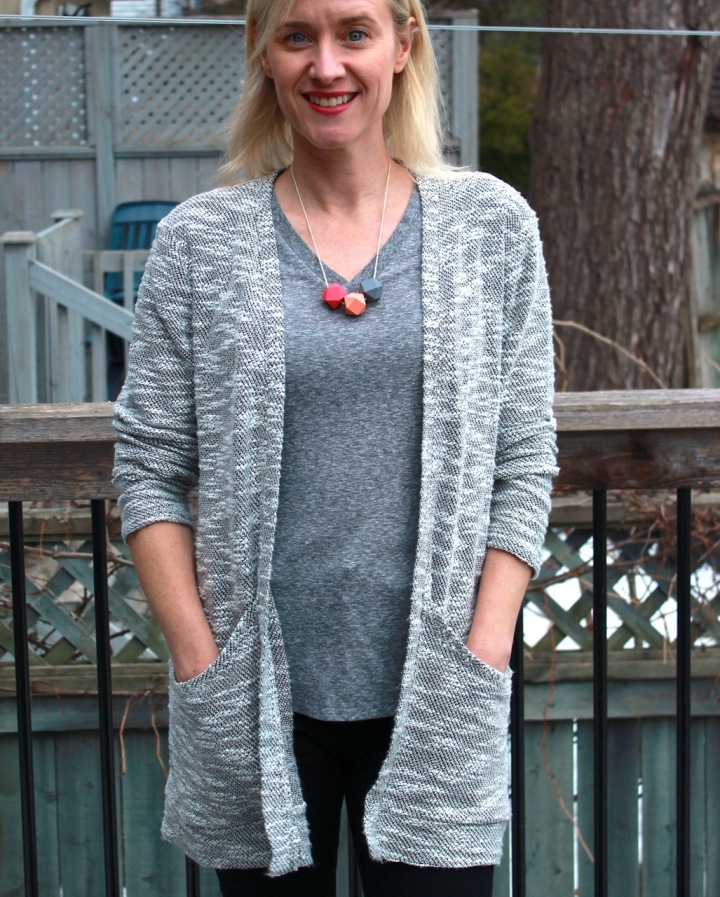 This fabric is a woven that stretches widthwise. I didn’t inspect it all that carefully when I bought it and I guess I just assumed it was a knit and would behave accordingly. What I didn’t anticipate was that my serger would chew up and spit out this woven like tobacco at a major league baseball game. When I tried to serge the shoulder seams, rather than joining the seams, the serger just pulled apart the horizontal threads, making one big mess.

I was pretty sure this was destined to be a wadder. (If you haven’t heard the expression before, it’s when something is so far beyond repair you just wad it up and toss it in the trash.) But I futzed around with a zigzag stitch on my regular sewing machine and managed to get the thing put together. It means there are a lot of unfinished seam allowances on the inside that I’m hoping won’t completely unravel in the wash. Well if they do, at least it got some wear before becoming a wadder. I do really like the shape and style of the cardigan so I might try sewing it with a more stable knit…or an actual knit, for that matter!

I’m happy to report that this cowl may be the most heavenly thing I have ever knit! I was perusing the shelves of my local yarn shop, fondling all the yarn like a some entitled guy who hasn’t yet figured out that #timesup, when my fingers happened upon what can only be described as rapture in a skein. It’s Amelie yarn by Illimani, described on Ravelry as “the most luxurious, softest and lightest yarn in the world. It is impossible to describe it with words.” It’s 56% silk, 40% alpaca, and 4% merino, and Ravelry lists its texture as “blown”.  Blown AWAY, more like. It really is the most amazing yarn. 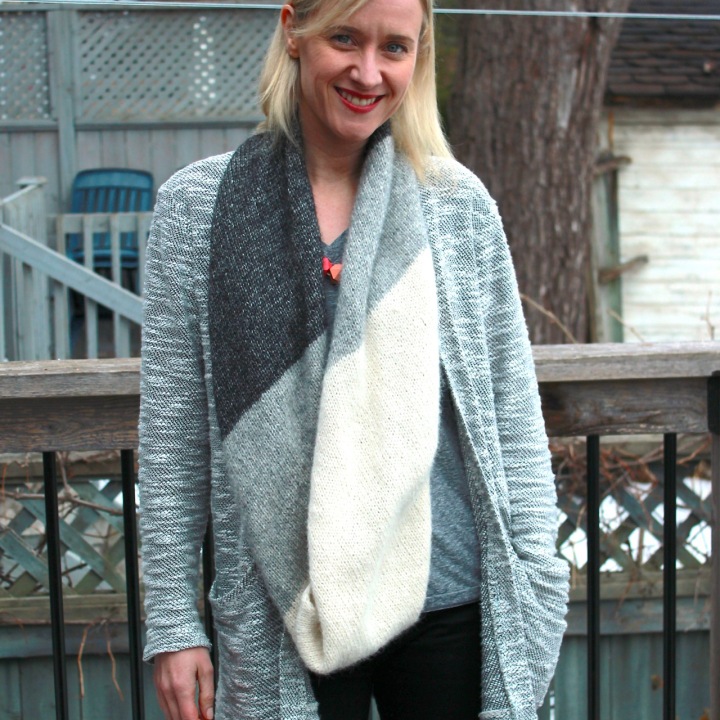 This is the Ombre Infinity pattern by Cynthia Parker, which, while not the most detailed or best-written knitting pattern I’ve ever used, was certainly the perfect pattern to show off these 3 colourways of the yarn. I am a *sucker* for anything resembling ombre or gradient. 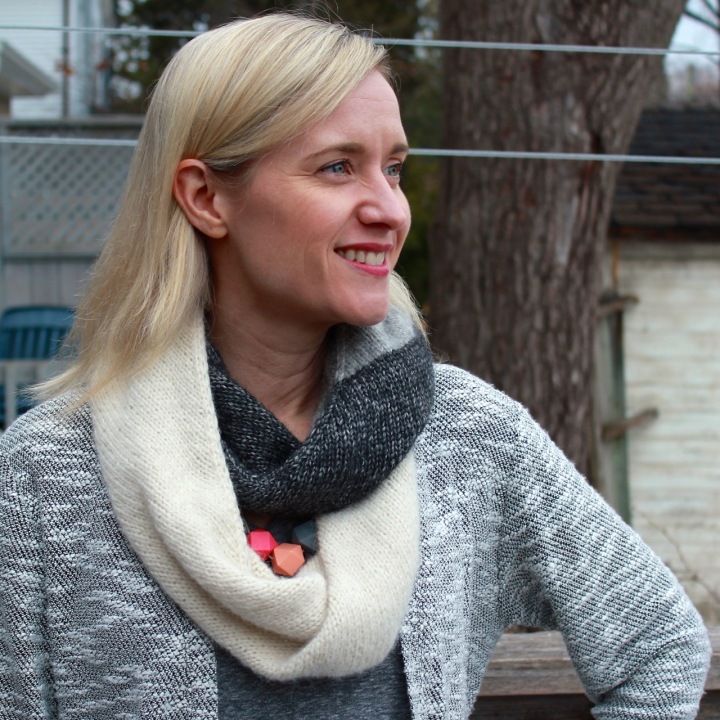 Can’t help but look beatific while my neck is wrapped in fibre from heaven. It does tend to shed bit of “blown” fluff a lot, but so far no pilling after a couple of months of use.

So if I wear this infinity scarf with this cardigan, does it draw attention away from the shoddy workwomanship on the cardi? Kinda like in the 80s, when girls’ fashion mags told us if we teased our bangs high enough, it would draw attention upward and no one would notice our oversized booty? Lol.

Ready to Wear Fast 2018 Update: have held strong to the pledge not to buy any clothes. I did have to go “unshopping” early in January to return some things I had ordered online in a fit of self-doubt just before the 2018 fasting began. Saw a lot of cute things while I was waiting in line with my returns but I’m seeing them through a different lens now…so much of it is trendy things that will be out of style in 6 months. The disposable attitude we’ve adopted towards clothing is a little nauseating for sure (and the fact that the store was in the middle of January clearance chaos, with clothes strewn *everywhere* in messy piles, certainly added to that feeling).  So I haven’t bought any RTW clothing, but I have purchased a lot of fabric. And like 3 lipsticks that I definitely didn’t need. (Anyone else a lipstick addict? Want to join me in forming a new LipAnon group??) I’m thinking of declaring February a no-buying-at-all month just to eliminate the psychological ‘crutch’ of buying anything at all.

Thanks so much for stopping by!

Leave a Reply to Lori B. Cancel reply