Just finished this cute summer top from a “Burda Young” pattern, 7051.   It’s got a retro-vibe, 60’s I guess. I used Woodgrain fabric by Joel Dewberry in ‘dill’ that I bought from Quilthome.com. Green’s not normally my colour but I chose it specifically to go with my ri-DONK-ulous Faith Hi Jericho boots made from kermit-the-frog suede leather, courtesy of the inimitable John Fluevog. Given the 60’s go-go feel of the boots, I think the top goes pretty well. 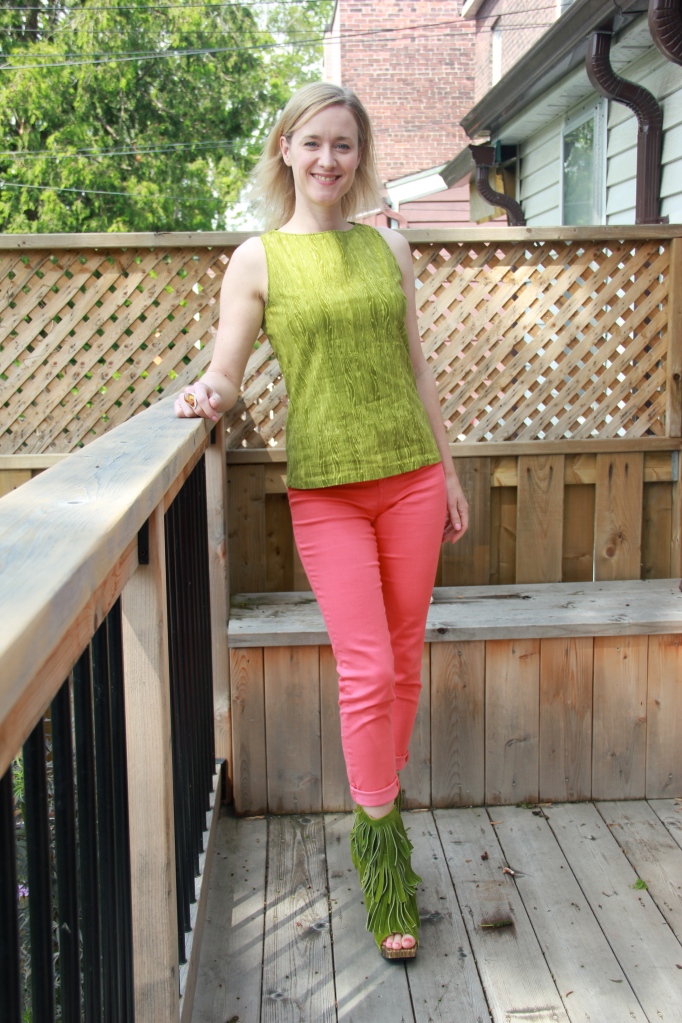 I’m also wearing my new fave jeans. They’re Yoga Jeans by Second Denim, a montreal-based company that does all their garment manufacturing right here in Canada. Which is practically a miracle given the fact that most garment manufacturers have skeedaddled from North America over to Asia. There was an interesting article in the Toronto Star recently about garment manufacturing in Canada that’s worth a read, which includes this little factoid: “The number of Canadians making clothes declined from 94,260 in 2001 to 19,340 in 2010, according to Statistics Canada.” If my calculator skills are working, that means only 20% of the jobs in the garment manufacturing industry in 2001 remained just 8 years later. So even cooler that these super-comfortable jeans in this AMAZING coral colour (they were labelled “watermelon”) are also supporting keeping jobs in Canada. No sub-standard sweatshop exploitation here! I bought them at my favourite little clothing boutique in the Junction neighbourhood here in Toronto called Black Daffodil.

I’m sure my sister would have something to say about this outfit — she’s convinced I wear too many bright colours, and lately I hear her in the back of my head just about every time I get dressed: “you’re going to wear THAT with THAT?”. Me, I can’t get enough colour! Suddenly this year there’s colour everywhere in fashion and even in home decorating (FINALLY!–I always wanted to barf all over those photo shoots of bland, monochromatic rooms in tones of beige and cream that filled the pages of magazines for, like, the last decade at least). So what do you think? Is it possible to rock Kermit the Frog green with hot coral (or watermelon, if you prefer)?

I teetered down to my local coffee shop this morning in this outfit and felt like a million bucks (even if I was a bit out of place among all the parents with strollers in flip flops and sneakers). Ran into my neighbour there who said “great boots”, to which I replied expansively, “I know, right?”.

One thought on “The Betty Draper Dill Pickle Shirt – Burda 7051”