I can’t keep myself away from my neighbourhood jewelry studio! I’ve taken a few classes at Jewel Envy: Introductory Fabrication, Introductory Casting, Intermediate Fabrication, and recently I completed an 8-week course on enameling. I must admit, the look of enameled jewelry is not really my first choice for pieces I’d like to wear, but I just love being in the studio and learning new techniques so I thought, what the hell, let’s try enameling.

Enameling is really just coating metal in melted glass by applying powdered, pigmented glass in fine layers and firing the piece in a kiln until the powder melts and fuses into a smooth, glossy coating.

This is the chevron necklace I made. 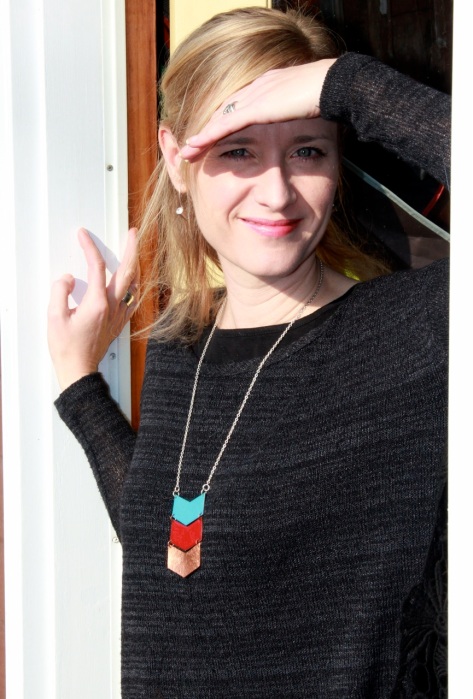 I’ve currently got a thing for turquoise blue and red in combination, apparently, as I used it for two of the pieces I made in this course. For the piece below, we were learning the cloisonné technique, in which fine copper wires are fused perpendicularly onto a copper base to create ‘sections’ into which different colours of enamel can be applied. The word cloisonné actually means “partitioned” in French. As it turns out, bending wires into shape is harder than I thought (which is actually a pervasive theme running throughout my entire experience learning how to make jewelry — *everything* is harder than it seems). Those triangle sections could be more uniform and even, but whatever – I’ll leave uniformity and evenness to machines and factories.

Below are a few practice pieces I made in the first couple of weeks of the course. The purple heart key ring is for my young niece, and I made it using a technique called sgraffito (from the Italian word meaning “to scratch”. Bonus to taking this enameling course is that I have added arcane vocabulary to my paltry European language skills.)  I applied several layers of pink enamel and fired each one, then applied a sparse sprinkling of purple enamel and scratched away some of the purple to form the initials, then fired again. The black & yellow cedar leaf outline was done using the stenciling technique: I fired several layers of yellow enamel, then I applied the ‘stencil’ (in this case, a sprig of cedar) and sifted black powdered enamel over top, removed the stencil and fired in the kiln. I seem to have been playing with just adding a fine sprinkling of enamel on the last layer in these pieces; looking at them now, I should’ve gone for the gusto and put a full coating of colour on for the last layer — that might have looked better. But these were all first-time experiments.

The blue and yellow piece is kind of interesting, in that I accidentally produced a piece that showcases the three different finishes it’s possible to achieve with enamel, depending how long you fire it for. The smooth, glossy finish you see in the other pieces takes the longest firing time, but before it reaches that stage the enamel goes through two earlier stages: ‘sugar’, where the enamel particles just start to slump and fuse but they still have a powdery, crystalline texture (see the white bits in the close-up below), and then ‘orange peel’, where it starts to melt even more but hasn’t quite smoothed out fully and retains a slightly pitted surface like an orange peel. My instructor said she’s tried to get a sugar finish but has never been able to pull it out of the kiln in time, as the enamel only stays at the sugar stage for a moment. For me, it was just accidental luck, as I was underestimating how much time the piece should be in the kiln for fear of scorching/oxidizing the piece. I used a combination of stenciling and sgraffito on this piece, starting with several layers of blue fired to gloss, then stenciling on some yellow, scraping some lines away and firing to orange peel, then finally sprinkling some white on top and scraping lines away, and firing to a sugar finish.

I love the vibrant colours you can achieve with enameling but I can’t help but think that my pieces just look like made-in-China baubles. I don’t mean to be all self-denigrating but truly, I haven’t seen all that many enameled jewelry pieces that look like “fine” jewelry to me. Maybe it’s because we are used to enameled things that are made in factories and available for cheap? Or maybe I just haven’t looked hard enough. I’m not sure. What do you think?

The final piece I made in the enameling course is a double layered pendant: the bottom piece is enameled and the overlay is a silver geometric cutout.

It’s a riff on the bracelet cuff I made in another class: 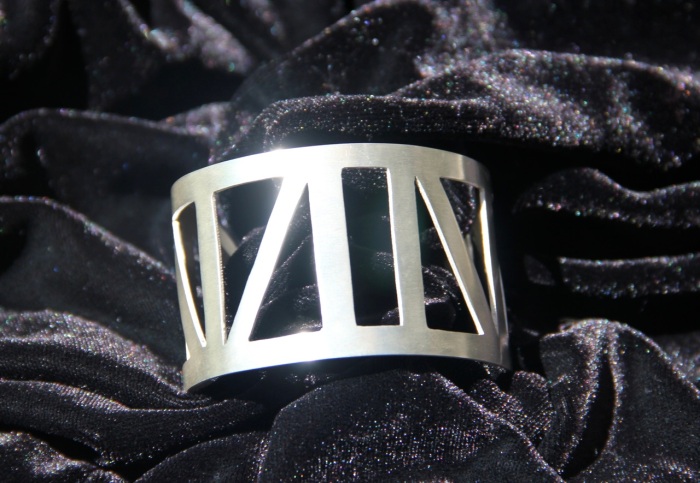 The bottom layer started off purple, and then I decided to add a sort of gradient sprinkling of fine silver powder for the final firing. What I didn’t know was that the purple enamel somehow reacts with the fine silver when fired and turns yellow! Here’s a pic of the underpiece when it was purple (it looks quite red in this pic, but it was actually more plum-coloured), as well as the silver overlay in the early stages of piercing & cutting. 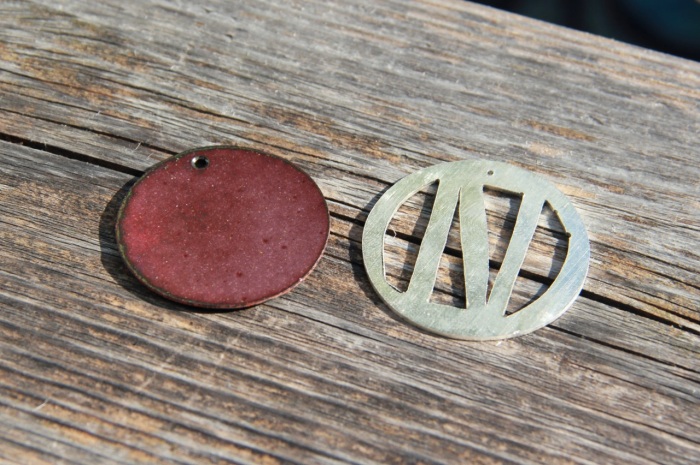 Here’s what the purple piece looked like after firing with fine silver particles:

I think the unintended yellow is actually alright — it’s a nice neutral, understated tone. The fine silver powder would’ve really popped against a purple background, but the universe was not going to allow for that, so who am I to argue? The universe wanted a yellow necklace!

Now that the enameling course is over, I’ve signed up for another lost-wax casting course. (You can read about the jewelry I made in my first casting course if you’re interested.) Stay tuned for the results of my attempt at creating a silver-and-pearls ring in a few weeks (*fingers crossed*). Thanks for reading!

Join 2,218 other subscribers
Follow Frivolous At Last on WordPress.com