Who gets a cold in summer? Me! That’s who! So as I’ve been dragging my ass around the house for the last couple of days, I thought I’d better try doing something productive other than napping and sipping tea. Hence the twig necklace. I’m sure my husband would much rather I went to get groceries to replenish our empty cupboards instead. But I’ll contemplate that during my next nap. 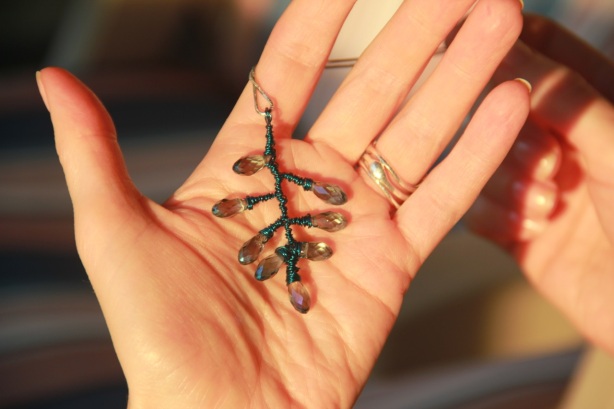 This design is from the book Wrapped in Gems by Mai Sato-Flores. I did it as a kind of a trial run for a more expensive version I’d like to make. This one is made of some cheap Chinese crystal teardrops and 28 gauge bright blue wire that I already had (both purchased at my favourite bead shop in Toronto, Arton Beads). It was a really quick process — maybe only 30 minutes total. I put it on a silver chain but this might look better on a pretty blue ribbon necklace. 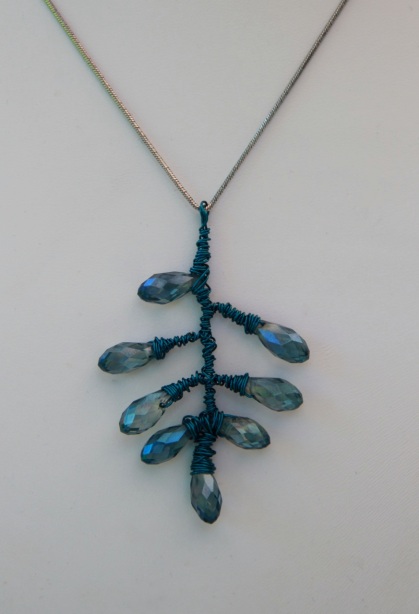 The design in the book uses sterling silver wire and peridot gems. It called for 25″ of wire, but I had to use twice as much wire to wrap the whole thing. That would get pretty spendy pretty quickly in silver. I’m also a bit reticent to have to deal with silver wire getting ‘work-hardened’, as I’m prone to bouts of zealous sloppy wrapping which necessitate unwrapping and re-doing. I hear that’s a lot more tricky with wire that doesn’t stay soft after it’s been worked. Still, I think this design would be much prettier with silver wire.

The book has lovely photographs of the author’s designs but the instructions are mainly text-based and lack illustrations of the steps. Which is not a huge problem, as most of the procedures aren’t rocket science and you can mostly work out what to do by looking at the photo of the finished object. There are a couple of other designs from the book I’d like to try, including the Tree Branch necklace pictured below.

Off to put the kettle on for a cuppa. I’m sure we’ll survive if we order pizza for dinner.

Join 2,219 other followers
Follow Frivolous At Last on WordPress.com